The Royal Belum International Hornbill Expedition is an amazing opportunity to survey the hornbill population in a magnificent setting within the world’s oldest rainforest which is estimated to be over 130 million years old. The site is the Royal Belum State Park, home to all 10 species of Malaysian hornbills and dubbed the ‘Hornbill Capital of the World’ by ECOMY.  It is also designated an Important Bird Area (MY07).

ECOMY proudly repeats for the 3 rd time, the The Royal Belum International Hornbill Expedition installation on August 25 th 2017. The 3-day event, one of ECOMY’s signature initiatives, was by invitation only and 9 international teams with 3-6 team members were identified and invited to partake in this limited slot expedition. Participants included teams from Brunei, Singapore, Thailand, Philippines, Japan, India, Taiwan, China, and the United States. One of the participant was non-other that Mr Noah Strycker, record holder in his famous ‘Big Year’ in 2015.

This Hornbill Expedition’s unique event marked the arrival of the migrating Plain-pouched Hornbills from their breeding grounds in Thailand. Numbers of birds sighted in previous years range between 100 to over 3,261 birds in one count!

There are 9 other resident species of which the survey also hopes to find and count including the Critically Endangered Helmeted Hornbill. All data collected by this expedition will be used as part of an action plan and strategy to help the management of the park and to promote ecotourism as a sustainable activity for the area. The event also saw all participants take part in a Seminar that was tailor-made to help promote the Park. 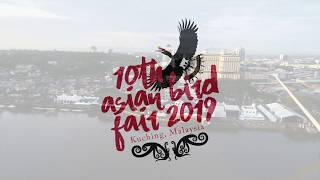